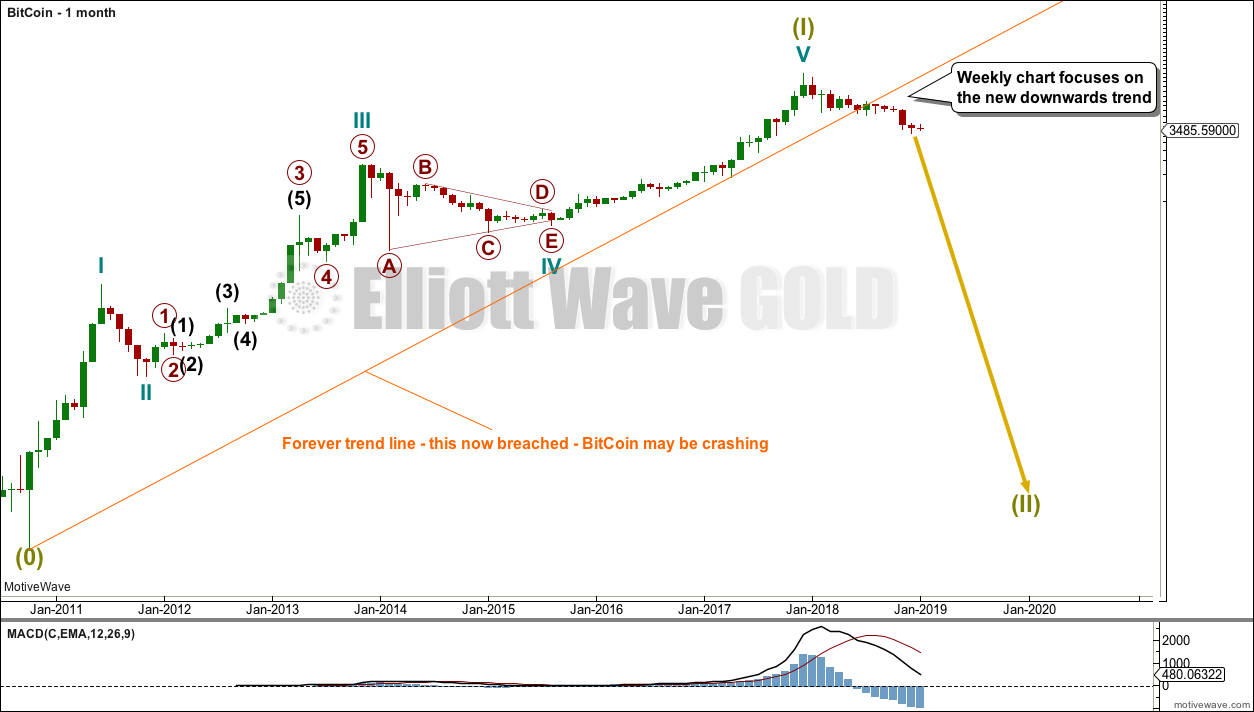 Last analysis on the 14th of December advised that a channel should be used to indicate when downwards movement was over and a sideways consolidation or bounce may have begun. The channel was breached on the 19th of December and price has mostly moved sideways since.

Summary: For the short term, this sideways consolidation may continue and may find a high about 4,722. Thereafter, another strong fall in price is expected.

It would be safest to assume that the bear market will continue while Bitcoin remains below 7,234.83. The target is about 1,924, but it may be much lower than this; it is possible this bear market may see the end of Bitcoin.

The data used for this analysis now comes from Yahoo Finance BTC-USD.

Updates to this analysis are in bold.

It is possible to see a completed five wave impulse upwards for Bitcoin.

I am unable to find reasonable Fibonacci ratios within this wave count. It appears that Bitcoin may not exhibit Fibonacci ratios very often between its waves, so this makes target calculation impossible. Classic technical analysis was used to identify a high in place on December 23, 2017.

What is very clear from this chart is that Bitcoin is a classic bubble. This looks like an even larger bubble than the Tulip Mania. The only thing about which I am certain is that this bubble will pop and Bitcoin will collapse.

Confidence that Bitcoin was most likely crashing started since the Forever trend line was breached in June 2018. 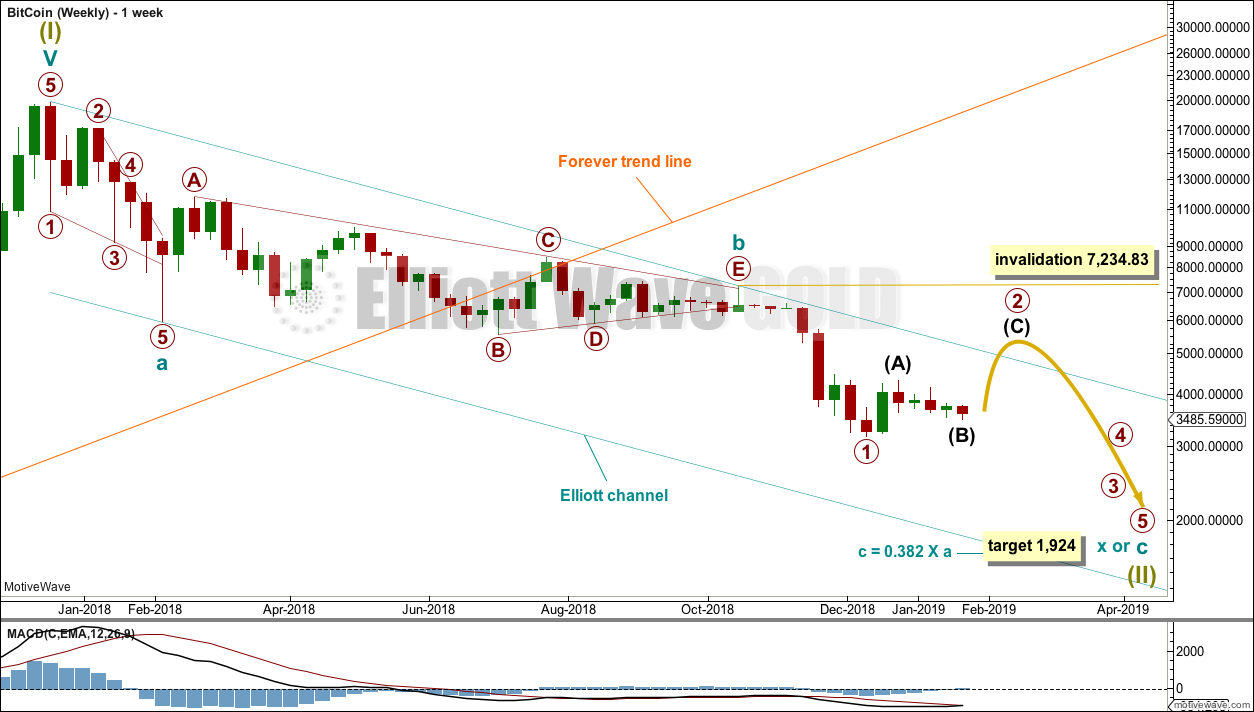 Bitcoin tends to behave like an extreme commodity: price moves upwards for about 2 – 4 weeks in a near vertical movement at the end of its rises. Following this vertical movement the resulting downwards movement is very deep (in percentage terms) and often very quick.

The next rise begins slowly with basing action over weeks or months, and then as the rise nears its end another vertical movement completes it. Also, there are volume spikes just before or at the end, which is another feature typical of commodity like behaviour.

This has happened now several times. The most notable instances are the rise up to the week ending 24th November, 2013, and the week ending 5th June, 2011. The following sharp drops were 94% and 93% respectively.

If this current drop continues like the last two examples, then a reasonable target may be about $1,390.94 or below.

Super Cycle wave (II) would most likely be a zigzag, but it may also be a flat, combination or triangle; a zigzag would subdivide 5-3-5.

An Elliott channel is added to downwards movement. Upwards bounces may find resistance about the upper edge. 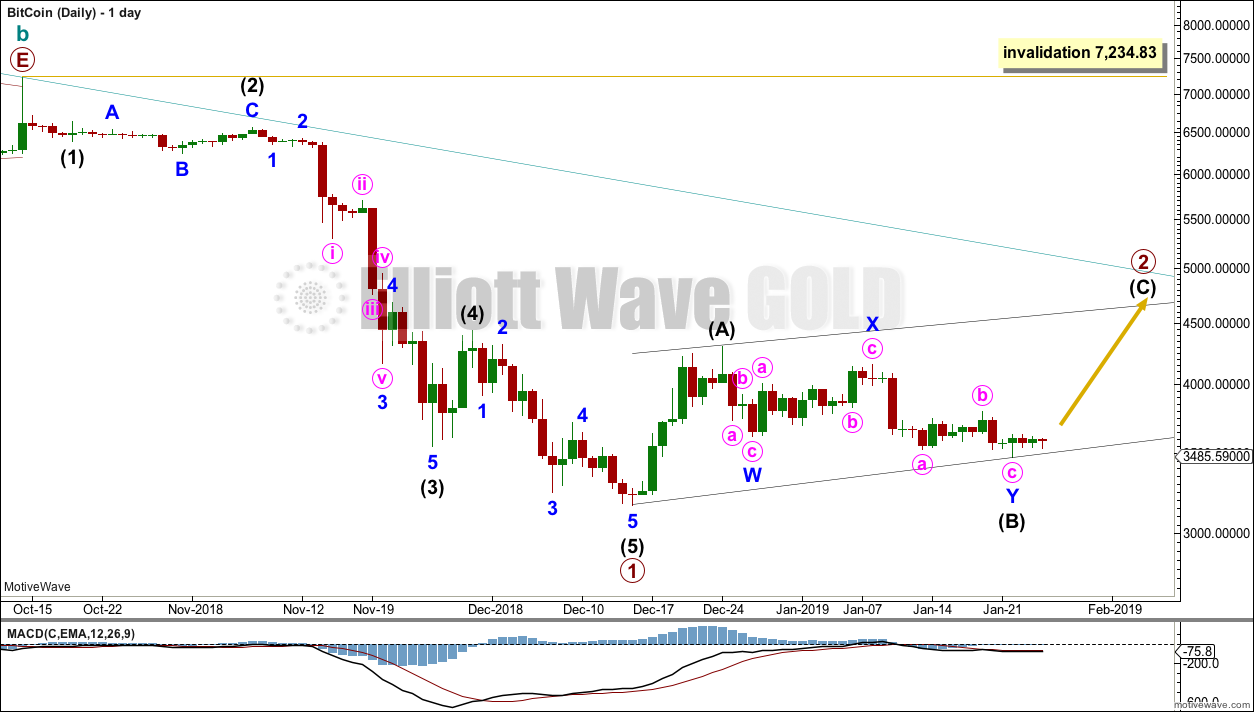 Cycle wave c must subdivide as a five wave motive sturucture, most likely an impulse. Within cycle wave c, primary wave 1 may be complete.

Primary wave 2 would most likely subdivide as a zigzag. So far, within primary wave 2, intermediate waves (A) and (B) may be complete. Intermediate wave (C) may end about the upper edge of the black Elliott channel drawn about primary wave 2. This may also be where upwards movement may find resistance at the teal channel copied over from the weekly chart.

The following can be noted when looking back at Bitcoin’s behaviour during its previous strong falls in price:

The 94% fall in price from June to November 2011 was characterised by:

– ADX did not remain very extreme for very long at all on the daily chart.

– RSI reached oversold and remained deeply oversold for three weeks; at the low there was only single weak bullish divergence with price.

– ADX remained very extreme for the last seven sessions to the low.

– At the low, On Balance Volume did not exhibit bullish divergence with price; it remained bearish and then exhibited further bearishness after the low as it continued to decline as price began to rise.

For the current fall in price, the current Elliott wave count expects the fall to be larger in terms of duration than the previous two noted here, and at least equivalent in terms of price movement in that a fall of over 90% is expected now.

So far at the lowest low from the all time high Bitcoin has only retraced 0.84. While this is deep, its corrections are usually deeper than this.

Currently, price is range bound with resistance and support identified by cyan trend lines about 4,300 and 3,170.

Posts from This Journal “биткойн” Tag

Posts from This Journal “биткойн” Tag